How to Establish More Balance in the Top-Heavy US Economy?

This article first appeared in The Globalist.

For all the decades-long effort to hype Anglo-American shareholder capitalism, one fact of life should have become abundantly clear to all honest observers by now: Low economic opportunity is the default setting of that brand of capitalism.

To reform this version of capitalism that excels in delivering benefits for the very top stratum of society, while letting most everybody else hang out in the cold, some notable Democratic 2020 presidential candidates – Senators Elizabeth Warren, Kirsten Gillibrand, Kamala Harris and Sherrod Brown – have endorsed a concept that has a proven track record of delivering better results for a far larger number of people.

It is based on what’s technically called “codetermination,” a form of corporate governance that shapes key countries in northern Europe, particularly Germany. It is a mechanism to make the society-wide responsibility of capitalism matter on the shop floor as well as in the executive suite.

This model of distributing economic power in a balanced fashion stands in stark contrast to the Anglo-American variant of capitalism which false-headedly assumes that democratic capitalism can be delivered by having publicly listed corporations controlled solely by shareholder representatives.

Those representatives grab any opportunity to offshore jobs and disdain higher wages, while at the same time seeking to divert funds from the given company’s investment budget to spike share value and executive compensation. Economic opportunity for others is diminished.

The northern European upgrade of codetermination establishes a far better balance. It is based on a corporate governance structure that reflects the interests of employees, executives, investors and other stakeholders. Most importantly, it enhances opportunity by improving economic mobility.

The insistence on rising wages on the Democratic side of the political landscape is long overdue because economists document that opportunity in America is low:

Northern Europe’s exceptionalismWhile Americans always like to consider themselves exceptional as a nation, in reality it is Northern Europe that is exceptional. Those nations provide the best opportunity on earth for youths by dint of grit, ability and pluck to determine their economic fate.
​
Studies and OECD analyses document, for instance, that sons in Germany, the Netherlands and Scandinavia can far more easily bootstrap themselves above their parents than American or British boys. Their movement between socioeconomic classes is more fluid by a factor of two or three than in the United States and UK where odds of being stuck for life in their parents’ income class are considerably higher. 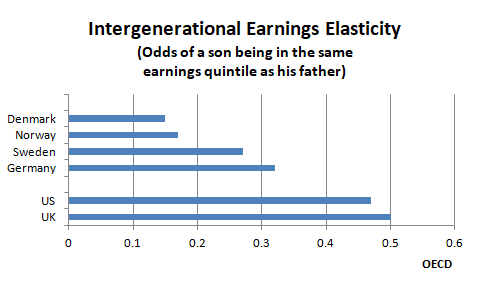 Public policies that create opportunity
Public policies in both education and corporate governance are responsible for opportunity in Northern Europe being up to three times greater than in the United States or UK.

First, European public policies in education and job training are more robust. OECD data affirm that the United States and the UK do the most inept job of rich democracies in providing youth with skill sets needed to seize opportunity.
​
It is stunning that the share of their youths with poor numeric/literacy skills is 2-4 times larger than in Northern Europe. 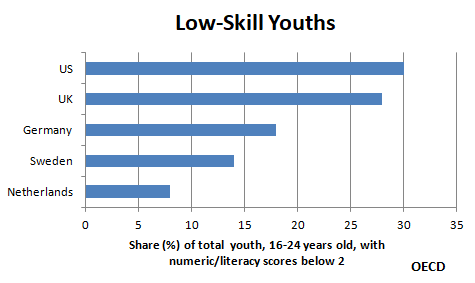 A nation’s prowess in arming its youth to maximize career opportunities can also be judged by comparing their skill set to that of their parents’ generation.

By that measure, the United States and the UK are exceptional only in the negative sense as they fail to provide opportunity for youths. The share of Americans age 16-24 with low numeracy or literacy skills (30%) is only three percentage points better than the cohort aged 55-65 (33%). And the share of British youth is only two percentage points better. It’s embarrassing.
​
The tiny generational improvement in skills vital to realizing opportunity in the United States and UK is dwarfed by the much larger generational improvement accomplished by genuine opportunity nations such as the Netherlands (18 percentage points), Sweden (10 points) and Germany (8 points). 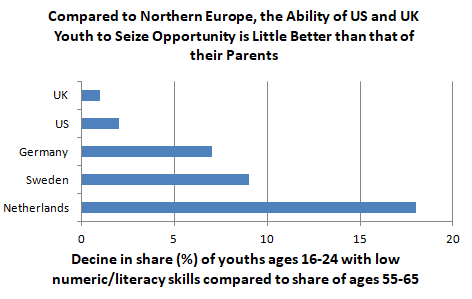 Codetermination creates opportunity
The second public policy central to creating opportunity is a codetermination corporate governance structure. Little known by Americans, codetermination (where up to one-half of corporate board members are employees) is commonplace in Austria, Germany, the Netherlands and Scandinavia.Compared to U.S. boards beholden only to shareholders, corporate boards in these nations invest more, pay higher wages and increase the stock of skilled jobs at home. Rising real wages incentivize skill acquisition and work effort, all important to realizing opportunity.

Investment decisions by codetermination firms produce a relative domestic abundance of high-skill, high-wage jobs. Sectors dominated by skilled jobs in the nations practicing codetermination are larger than they are in the United States. The skilled-job sector in the Netherlands for instance, which encompasses 47% of that nation’s jobs, is nearly one-third larger than the 36% in the United States.

Public policies were vital in creating this innovation — for example to permit the agglomeration of capital without exposing investors to undue risks. The goal was to benefit the many stakeholders and the public.
The Anglo-American structure of corporate governance that followed has failed, with benefits unduly hoarded by just one group, shareholders. The alternative codetermination structure hews to the original expectations by benefitting all stakeholders while improving economic opportunity.

The economics of corporate governance is a settled issue. The only question is whether the political will exists to toss the Anglo-American governance model in the trash bin of history.