The Superiority of Codetermination

The United States should learn from the better performance of European companies which have worker representation on boards.

In comparison with the United States, the economies of northern Europe do a superior job of fulfilling Adam Smith’s hopes for capitalism as a mechanism to diffuse prosperity. Their success in displacing the US as the economic land of opportunity is a consequence of American corporations prioritising shareholder returns. In contrast, northern European companies with a codetermination system—where employees sit on company boards—prioritise strengthening domestic labour markets.

The major adopters of codetermination are Austria, Netherlands, Germany and Scandinavia. Their company boards create high-wage jobs at home rather than export them, which explains why most sustain sizeable current-account surpluses. It also explains why wages are higher and why median labour compensation, as calculated by OECD economists, has for decades grown anywhere from twice to ten-fold faster than in the US. 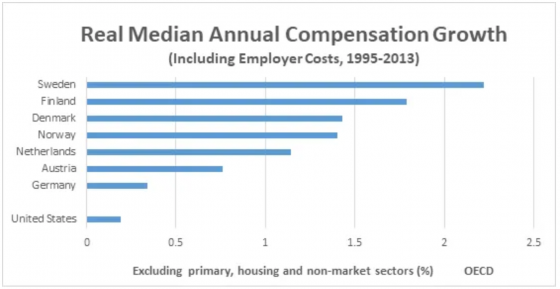 Stronger wage growth has enabled workers in codetermination adopters to garner thebulk of gains arising from improved labour productivity. In contrast, Americans during 1995-2013 realised only 13 per cent of the accruals of rising productivity. 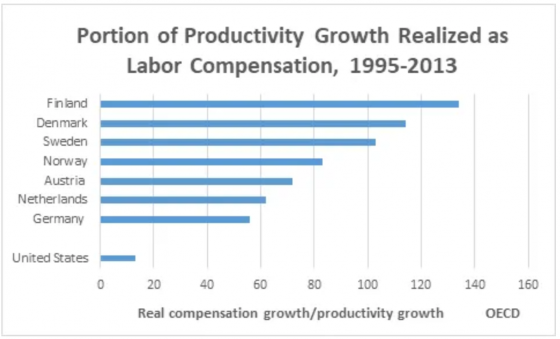 One consequence is that the US income distribution, measured by the Gini coefficient, is badly skewed—comparable only to that of middle-income countries, such as Greece, Chile or Turkey, rather than codetermination adopters. Another result is that the middle classes in the latter countries are larger—by a sizeable 25-40 per cent—than the US middle class.

Companies in Austria, the Netherlands, Germany and Scandinavia have met the challenges of globalisation by reducing or adding few unskilled jobs. Instead, they upgraded product lines to warrant higher wages, causing the share of skilled jobs domestically to jump by double digits in some instances (Austria, Denmark, the Netherlands and Germany).

Robots have become as much as five times more common per thousand workers in Germany than in the US. Consequently, these have become the most competitive economies on earth, despite paying the world’s highest wages. In contrast, American corporate boards have significantly increased the share of low-skilled jobs while offshoring millions of high-wage / high-productivity jobs, causing the share of skilled jobs to barely move.

These different corporate priorities have entailed significantly greater shares of skilled, high-wage jobs in northern European economies today than in the US. OECD data show that the share of jobs in skilled occupations in Austria and Denmark, for instance, leapfrogged that in the US between 1998 and 2006.

Consequently, the share of the workforce in skilled occupations in every major codetermination adopter has become larger than in the US. 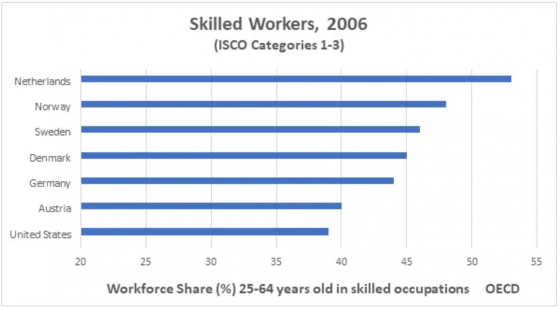 The expansion of skilled occupations in northern Europe significantly exceeds the supply of college graduates, causing a skills shortfall. In the Netherlands and Germany, for instance, the skilled-worker share of domestic labour forces is 20 percentage points or so greater than the share of college graduates. In contrast, due to job offshoring, the share of skilled jobs in the US has nearly stagnated.

Importantly, the widespread upgrading of workforce skill levels in codetermination adopters has forced employers to reach deep into the ranks of non-college workers, drawing them into the national economic mainstream. Their elevated pay nearly matchesnational medians, whereas the trend among non-college Americans is to fall further behind. The median wage for even the most advantaged among the latter—high-school graduates with some college—is about 10 per cent less now than in 2000.

The contribution of codetermination company boards to upskilling economies has also translated into greater employment opportunities for non-college men and women than in the US, with a 10-25 per cent greater share in work. 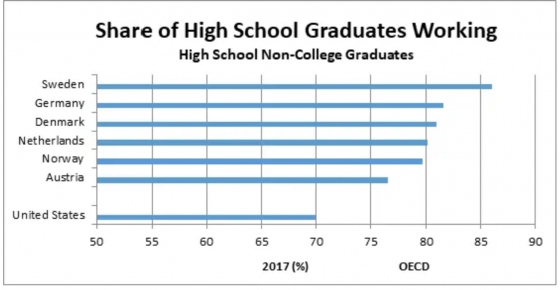 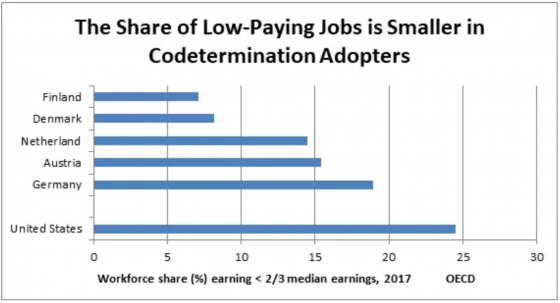 Last year, the World Economic Forum (WEF) concluded that Germany—the largest codetermination adopter—was the globe’s most innovative economy. Its capacity to devise and adopt new technologies is superior to that of the US. Prioritising embellishment of the domestic economy, codetermination company boards drive entrepreneurship and innovation to reap the benefits of technological change, including new products and associated labour upskilling.

Sigurt Vitols of Germany’s WZB evaluated the WEF innovation-capacity scores and the European Trade Union Institute’s European Worker Participation Index, measuring the extent of participation in companies by country. He found a ‘very positive correlation (0.601532) between the strength of worker participation and the innovative capacity at the national level’. 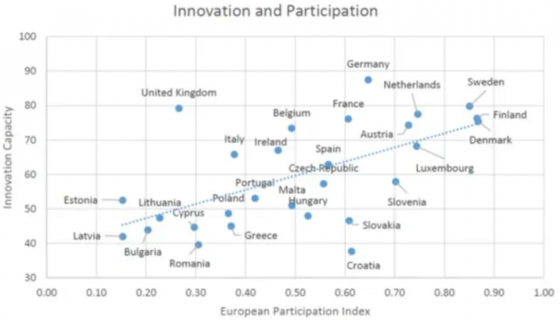 This innovation success includes the nurturing of entrepreneurs. In conjunction with the University of Pennsylvania’s Wharton Business School, US News annually ranks Best Countries, including assessments of their entrepreneurial environment and success. Germany was ranked first globally for entrepreneurship in 2018 and second in 2019, with the US trailing. Six of the 14 countries most hospitable to entrepreneurs are major codetermination adopters.

Supporting evidence comes from the World Intellectual Property Organization’s internationally comparable database. Patent applications per $100 billion of economic activity by German residents were higher in both study years, 2007 and 2017—by 18 per cent in the latter case than in the US. 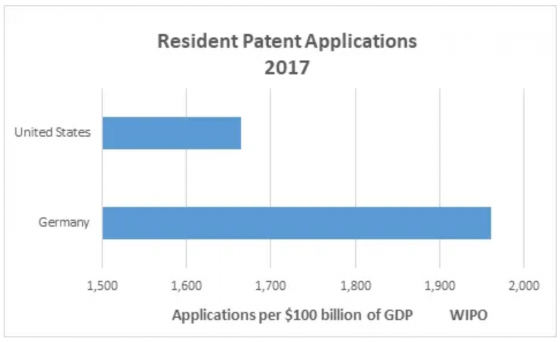 Overall, by making workers stakeholders with influence in the companies for which they work, northern European countries with codetermination systems perform better than US corporations accountable only to their shareholders.​