This article first appeared on SocialEurope.eu.

The travails of the US economy come amid a politics never so poisonous since the civil war.

Best medical practices to ameliorate the Covid-19 pandemic feature lockdowns but carry an immediate economic price. Evidence has however accumulated that intensive lockdowns lead to a robust economic rebound.

In February, political leaders confronted an apparent choice between minimising the medical or the economic impact of the coronavirus. Those prioritising the first imposed rigorous lockdowns, travel bans, contact tracing and massive testing. The medical payoff has been spectacular, with limited infections and few deaths in nations as varied as Iceland, Japan, New Zealand, South Korea, Taiwan, Uruguay and Vietnam.

Others—including France, Germany and Spain along with China—were less successful for a variety of reasons but by early summer lockdowns had suppressed infections and deaths. Among European Union members, daily Covid-19 deaths fell dramatically from 3,000 in April to 125 by the end of August.

Leaders who prioritised economic activity meanwhile adopted at best partial lockdowns, de-emphasising medical risks. Sweden was the most prominent European example of a group which includes the United States, Russia and Brazil. Due to ideological reasons, incompetence or ignorance, their leaders refused countrywide campaigns to corral infections—a murderous decision given the stealthy (frequently asymptomatic) advance of the virus.

In the US, the outcome has been a viral stagnation loop: the easing of lockdowns is followed within weeks by resurging caseloads, which induce relatively ineffective new lockdowns, which in turn leave the virus in the ascendant. There was a statistically significant correlation between the relaxations of the US lockdown in May and Covid-19 spikes in June. Covid-19 deaths rebounded to 1,000 a day by the end of August, compared with fewer than 50 combined in France, Germany, Spain and Italy.

This pattern of lockdown easing and resurging infection has also been evident across Asia and Europe, but with a crucial difference: infection spikes are far smaller than in the US. Benefiting from successful national programmes, lockdowns have reduced viral caseloads even in new hotspots to levels manageable for testing and contact-tracing.

Moreover, the economic rebound in those countries far outpaces that in the US or Sweden. All the rich democracies adopted policies to minimise the economic impact of lockdown, exemplified by the €400 billion French injection, the $4 trillion US Federal Reserve Bank splurge and the potent German Kurzarbeit model of support for short-time working, now mimicked across much of Europe. Yet the effectiveness of those stimulus policies has proved to hinge on how well countries suppressed infections.

Early in the pandemic, more aggressive lockdowns came at a steeper economic price. By April, daily business activity had fallen precipitously in Germany to only 40 per cent of the January level, with France (below 30 per cent) and Spain (below 25 per cent) faring even worse. And whereas during the second quarter US gross domestic product fell by 9.5 per cent, the corresponding declines were 13.8 per cent in France and 18.5 per cent in Spain.

But the economic consequences became more evident as the quarter was unfolding. Where infections had been more effectively suppressed, lockdowns could be eased and economic activity picked up more quickly in the major European countries than in the US or Sweden. By the end of July, daily economic activity in Germany had nearly doubled, to almost 80 per cent of the January level, while activity in France and Spain was at more than twice its nadir.

In contrast, mired in its viral loop, the US economy struggled upward over the second quarter, and activity actually declined during June and July in Sweden. By the end of July, daily economic activity in Sweden and the US was barely 60 per cent of January’s level. Thus, over the summer, activity in Germany, France and Spain leapfrogged that in the US and Sweden, rising to about one-third above (see chart). 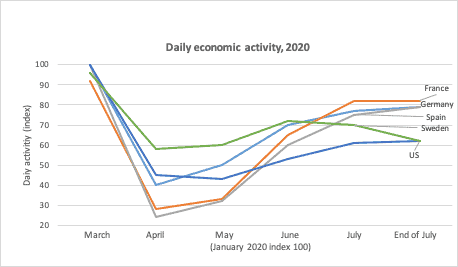 Statistics compiled by the Financial Times confirm that US economic activity has stagnated, led by weaker consumer spending in August with retail footfall flattening. US employment growth has also slowed, with new weekly unemployment claims topping one million. The share of business shutdowns and lost jobs becoming permanent meanwhile more than doubled, from 21 per cent in April to 55 per cent in July.

The loss of income from unemployment is being exacerbated by wage cuts and reduced hours, affecting 20 million US employees in July. The future looks no better. Reversing months of rising optimism, US consumer confidence fell in July and declined again sharply in August—compounded by the failure of the president, Donald Trump, and Congress quickly to renew government pandemic support at earlier levels.

This stalling contrasts with Germany, where economic activity continues to recover. The IHS Markit purchasing managers’ manufacturing and services indices each rose strongly into expansion territory in July and August. And the business-climate index compiled by the Ifo Institute increased in August to 97 per cent of its January level. German enterprises are also paring back use of the Kurzarbeit public subsidy, adding to workforces and expanding output, indicating rising expectations.

Trump’s failure to appreciate that economic recovery hinges on infection suppression has mired the US in a stagnation loop of historic significance. Without a vaccine in hand, the US can only break free and rebuild its economy with more effective virus suppression, featuring expansive testing with rapid results and backed by contact tracing. Polarised politics will hinder that effort. Yet only in that fashion can the nation begin healing from the agony of multitudes of needless deaths—the darkest period in American history since the civil war.