This article first appeared on RealClearPolicy.com.

President Biden can display bipartisanship by adopting an ambitious proposal from Federalist Society co-founder Steven Calabresi of replacing sitting justices to establish 18-year Supreme Court terms. As modified below, the concept continues the tradition of 9 justices on the court while the transition provides Biden with four new appointments in 2021- 2022. Super majorities could be required for the confirmation of justices thereafter.

With only a bare Senate majority needed for confirmation, the U.S. Court has proven vulnerable to appointment by Republican Presidents of partisan judges holding fringe opinions outside the American mainstream. Under Chief Justice John Roberts since 2005, it has become the first partisan court in U.S. history; it also features 4 of the 5 most conservative justices since 1937. Trump appointees Gorsuch, Kavanaugh and Barrett are cut from the same cloth.

Their rulings including Rucho have empowered gerrymandering. And they have further institutionalized voter inequality with Shelby County, Husted, Purcell and Crawford, embracing the tactics of state and local Republican election officials denying ballot access to Democrats. Too many of these rulings have dubious or illusory constitutional provenance such as money is speech — rendering the U.S. electoral system an international embarrassment, judged of lower quality than systems in Europe or even Brazil. 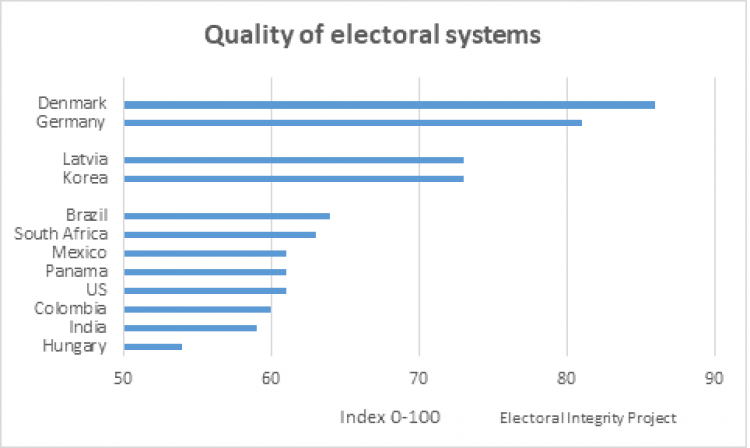 The Legitimacy Crisis of the Roberts Court

The rulings are responsible for the Roberts’ court having what the 20th century’s leading American democracy theorist Robert A. Dahl would term a legitimacy crisis. Dahl explained that “the policy views dominant” on Supreme Courts stretching back to 1937 have been “never for long out of line with the policy views dominant among the lawmaking majorities of the United States.” He attributed this important conformity of Court rulings with legal views of senior officials to the presumption that presidential elections are popular referenda, winners appoint new justices with opinions paralleling those of senior political officials. Thus, “the Supreme Court is inevitably a part of the dominant national alliance,” its rulings reflective of thoughtful contemporary public and legal sentiment.

The noted Roberts Court rulings evidence a collapse of Dahl’s formulation. The explanation for this disconnect is straight-forward: All Roberts Court partisans excepting Thomas were appointed by also-ran Presidents who lost the popular vote. All but Roberts himself received the fewest Senate confirmation votes in history — and nearly all confirmed by Senators representing fewer than half of American voters.

The Roberts partisans have done violence to what Dahl terms the Court’s “unique legitimacy” that justified its evolved role as ultimate constitutional interpreter. That legitimacy can be structurally reaffirmed by nonrenewable term limits of 18 years, subject to super-majority Senate confirmation.

Calabrisi suggested that current justices be terminated at random beginning in 2022. Rather than chance, it’s instead better to move sitting justices to senior status by seniority, Biden establishing two appointments per presidential term this way:

The multiple appointments proposed for Biden are common in American history. Since 1900, three presidents have appointed 5 or more new justices, and another three have appointed 4. Disgruntled Republicans have meager grounds for complaint in light of shenanigans regarding the Gorsuch and Barrett appointments.

This proposal is unlikely to be unraveled in the future. Some 59% of Americans (including 49% of Republicans) support term limits for judges. It would bring the Supreme Court into general conformity with every other major democracy — and with 49 states. The reforms are substantive: In removing partisanship as the seminal requirement for appointment, they restore the Court’s “unique legitimacy.” Most importantly, the reforms will be impervious to unwinding should the upgraded court soon guarantee equality of voting rights, equality of ballot access, end pay-to-play politics, strengthen worker rights and the like.

George Tyler is a former deputy assistant treasury secretary and World Bank official. He is the author of books including Billionaire Democracy and What Went Wrong.