The European Union is leading the world in adopting limits on greenhouse-gas (GHG) emissions, notably via hefty carbon taxes. New policies always experience teething problems but an EU environmental regulation adopted in 2009 has become an embarrassing own goal.

The regulation classified wood burning as environmentally superior to fossil fuels—even carbon-neutral—and exempted it from carbon taxes. That was intuitive perhaps but an untested presumption adopted in a data vacuum. The notion was that harvesting forests for power-plant fuel would establish a virtuous cycle, with tree regrowth offsetting the wood-burning emissions.

But rigorous subsequent analyses have led experts to debunk the notion of wood as carbon-neutral. In no scenario, even stretching over a century, does replanted forest sequester sufficient carbon. In the most environmentally beneficial scenario, a quarter of a hardwood forest can be harvested for power-plant fuel and, if replanted with hardwood—and the entire forest left untouched and free of fire, drought or infestation during the subsequent century—will sequester all of 66 per cent of the emissions released by the initial burning.

Research since 2009 has moreover revealed a second problem with wood: coal nearly always has lower net emissions, initially and over time.

An authoritative analysis by the Massachusetts Institute of Technology in 2018 concluded that power-plant emissions from wood burning were 80 per cent greater initially per kilowatt hour (kWh) generated than from coal. Wood has a lower combustion efficiency and its production chain—harvesting, chipping, pellet-forming, drying and shipping thousands of miles—produces greater GHG emissions than coal production.

That most optimistic wood-burning/replanting scenario, harvesting only a quarter of a hardwood forest, is one of the few superior to coal. A century later, atmospheric GHG concentrations are 38 per cent lower (Figure 1) than had power plants burned coal initially instead. Another superior scenario is clear-cutting the forest and then replanting with hardwood—its atmospheric impact a century hence will still be 14 per cent lower than for coal.

Figure 1: impact on atmospheric GHG concentration after 100 years per unit (EJ) of electricity generated from solar, wood or coal 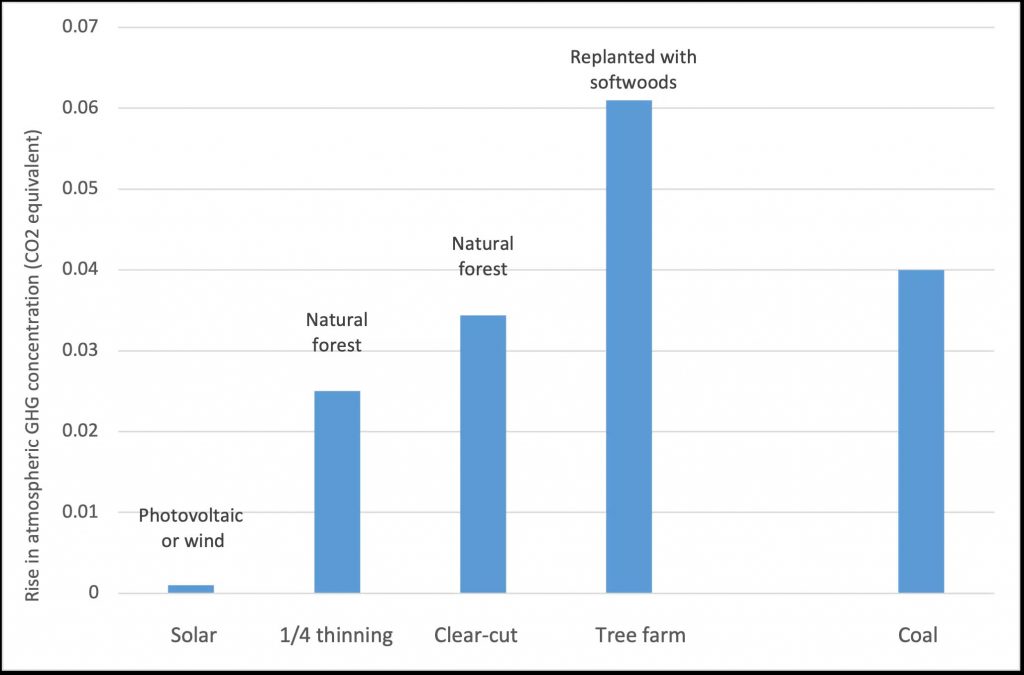 But these relatively benign harvesting scenarios are uneconomic and exceedingly rare. The 2009 regulation induced a massive conversion of coal-fired EU power plants to wood pellets, produced across Europe and imported from the United States and Canada. Wood is harvested by clear-cutting hardwood forests, with the denuded land converted to a tree farm by planting faster-growing softwoods such as pine.

Softwoods provide harvesters with the most regrowth volume and profit in the shortest time. (In the southern US, for instance, in recent years old-growth oak and hickory forests have been clear-cut in quantities four times greater than the annual cutting of the Amazonian rain forests and replanted with loblolly pines.) Yet atmospheric GHG concentrations a century hence are 52 per cent greater (.061ppm versus .04ppm) than had the power plant simply burned coal initially instead.

Softwoods absorb only 60 per cent as much carbon dioxide as hardwoods. True, fast-growing softwoods absorb more for two to three decades than hardwoods but absorption tails off so much that it is exceeded thereafter by the CO2 emanating from the tree-farm soils—these now on balance increasing atmospheric GHG concentrations. Hardwood forests sequester carbon more slowly but net absorption continues for hundreds of years.

A third problem with wood revealed since 2009 is its cost. Photovoltaics and wind turbines are both environmentally superior and produce electricity at a slightly lower cost, levelled over  the lifecycle, than polluting coal or natural gas—and at a much lower cost than polluting wood (Figure 2). 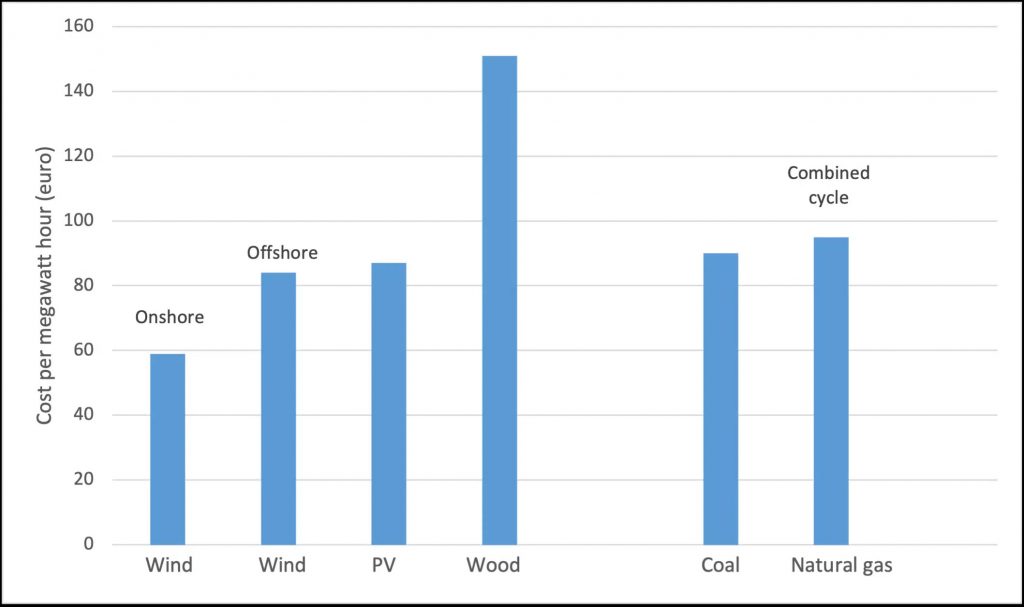 Especially with carbon taxes, market forces in the EU dictate the abandonment of fossil fuels. And market forces should also be dictating the abandonment of uneconomic wood—owners writing off wood-burning power plants as stranded assets. But the 2009 regulation has turned that calculus on its head. With wood erroneously classified as ‘renewable’, EU members provide power plants $7 billion (€5.9 billion) in annual subsidies to offset the high cost of burning wood.

That folly has empowered utilities to temporise rather than making the transition to genuinely renewable generation. Finally, wood burning has accelerated GHG emissions at a critical juncture, as affirmed last month by the Intergovernmental Panel on Climate Change, with polar ice sheets threatening irreversibly to melt and permafrost to thaw—global harm which cannot be undone.

Under scientific pressure, the EU is having second thoughts. It should rectify its wood blunder by adopting reforms to incentivise electricity generation with genuine renewables. Listen to scientists urging that wood be stripped of its carbon-tax exemption and follow the lead of the Netherlands by ending its subsidies. Those reforms should also become components of the ‘Brexit’ negotiations, in light of the UK’s misguided leading role in wood burning.