About What Went Wrong

“The loss of US family prosperity during the past generation is a uniquely made-in-America phenomenon. Economic stagnation has nothing to do with docile work forces and cheap wages overseas, technology change, or globalization, and everything to do with Washington policies that favored firms over families.”

Available now where books are sold. 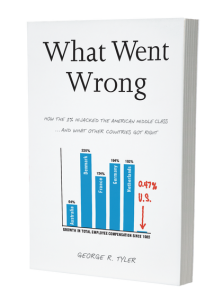 What Went Wrong stands alone from any book you’ve ever read examining the economic plight of America. It’s a book written by an international economist who spent much of his career on Capitol Hill and Washington, witnessing first-hand how economic policy was made. Yet, it is certainly not an insider’s book because George brings a broader international perspective in parsing the era that began with Ronald Reagan in 1980. He writes plainly, with clarity provided by his deep understanding of how families in other rich democracies have fared in the decades since that election. That background provides George with a unique perspective for sifting through the cross currents of economic information to reveal the root causes of American family stagnation. He focuses on the seminal issues of productivity, regulatory capture, wage growth, and weak corporate governance responsible for Americans doing so poorly compared to other families in nations like Australia or Germany. And, it also enables him to expose the economic myths which have rendered voting choices opaque during this era of decline for America. What Went Wrong is also different from other books in providing specific recommendations offering a pathway for families anywhere to rekindle the American Dream. That is why George’s book is likely to become the most optimistic economics book you will ever read. It is not a pathway easily taken because the American political system has become dysfunctional. Yet, it is an invaluable guide to a brighter future because the outcome is certain, the economics based on real results over decades in other rich democracies. It is a must-read for any American interested in determining how his or her children can live a better life than their parents.

​Only a relative handful of Americans have benefited from the credit bubbles, deregulation, and other Reaganomic policies and outcomes since 1980, garnering most of the gains from growth. As economists Daron Acemoglu of MIT and James Robinson of Harvard make clear in their book, Why Nations Fail, such upward income redistribution is the template of economic history. For many thousands of years, mankind has continually labored under an extractive economic model that narrowly benefits the few. Within the framework of this long sweep of history, the Reagan decline is readily categorized as merely another iteration of this traditional pattern. The annual redistribution of gains from growth upward over the span of this decline differs from the usual pattern throughout economic history only in detail and of course, in its gargantuan magnitude: Compared to 1980, the American business community in 2012 was redistributing upward about 5 percentage points of GDP annually from employees, an amount nearly equal to the net export surplus of OPEC oil producers. This is the grandest income redistribution in world history.

“George R. Tyler draws on his long public and private sector experience, both domestic and international, to fashion a wide-ranging indictment of late 20th and early 21st century American capitalism. What Went Wrong? is a “J’accuse” aimed at policies favoring corporate elites but hurting most Americans, policies that seized the U.S. economy starting with the election of Ronald Reagan in 1980 and have not let go.”  [ Keep reading… ]

“…[Tyler] provokes outrage with his impassioned portrait of an America where job security is a relic of the past.”

“Tyler’s timely and convincing book confirms what Americans feel in their bones: the economy is rigged against them and something is definitely wrong.”

“…well-grounded in data and fact. Anyone with an interest in economic policy ought to have a look.”

“Several books have examined the effects of the recent recession, but few have dug as deeply into the root causes of [our] country’s current economic malaise as George R. Tyler’s What Went Wrong… Though his conclusions are undoubtedly controversial, Tyler grounds his arguments in data and facts, providing a deep exploration of our current economic situation and the pre-Reagan policies that, if implemented again, may lead us out.”